How Much Power Do I Need?

how much power do i need?

To determine your basic home power needs, ask yourself these questions:

Do you use mains or tank water?  Tank water pumps, like those on farms and lifestyle blocks, require a larger 240-volt generator (usually 3800 watts or above due to start up power needs - visit the section on Power Management to find out more).

How do you heat your home?  Heat pumps typically need over 5,000 watts or more to run and cannot be powered by a portable generator. Smaller column heaters can run on generator power.

Is your hot water heater electric or gas? Gas heaters obviously will use less power – as little as 1500 watts. Electric heaters often require at least 4500 watts.

If you are only going to be running a few basic appliances, the EU22 or EU30 will suit your needs.

Most household appliances use between 3000 and 6500 watts, so a there is a Honda Generator available that will cover them all...just not all at once! The more items you want to run at the same time is the key to knowing what size generator to get. Visit the section on Power Management to find out more about how to use your generator more effectively.

If you heat your home with a small heater and use town supply water, you can generally expect that 3000-5000 watts will cover your needs. If you have want to run a larger heater and/or a water tank pump, you will likely need a 5500w to 7000 watt generator.

Industrial power needs range widely based on what kind of tools you are using.

Keep in mind that wattage required for starting a tool or appliance with a motor will be much higher than the watts required to run the device.  See more about starting vs running wattage on the next tab.

If you need the wattage on a specific tool, see our section on determining the power needed by an appliance below.

See our section on power management to learn how to use a smaller generator to power more.

DETERMINING THE POWER REQUIRED BY AN APPLIANCE

Most appliances and electric motors list their power requirements in amps. Typical locations include:

You can use an appliance load tester to determine the exact power needed for a variety of tools and appliances.

Generators are often advertised at the maximum wattage they can produce. But you’ll also see the “rated power” listed.

In general, use rated power to determine if a generator will be able to adequately power your applications continuously.

Some appliances require extra power to start up, while others maintain the same power requirements constantly.

To calculate your power needs correctly, you need to know which kind of load you are dealing with. (A load is defined as the device that you are powering.) There are two kinds of loads:

Reactive loads contain an electric motor, which requires additional power to start, but significantly less power to run once it gets going. Typically starting power is 3 times the amount of power to run the application. Examples of reactive loads include:

Some household appliances, like refrigerators, have internal fans that come on intermittently. Extra wattage/power is needed to start the fan each time. Refrigerators also have a defrost cycle that requires power in addition to the compressor and fans.

Reactive loads may also require additional power when the electric motor begins to work. For example, when a saw begins cutting wood, its power requirement will increase. This is not applicable for most household appliances.

Some devices are labelled or promoted with a power number. For example, a hairdryer might say "1000W." This means the hairdryer itself produces 1000 watts of heat energy. But the amount the hairdryer uses from a power outlet is always more than it produces in heat. This is because the device’s energy use is not 100% efficient.

Another example is a microwave oven. It may be marketed as "1100 watt oven" and indeed produce 1100 watts of cooking power, but it will require more wattage than that from a generator.

For some appliances, you can determine the power needed by looking at the data tag supplied by the electric motor manufacturer.

All electrical motors should have a data tag attached to their bodies that give volts, amps, phase, cycles, and horsepower

To determine the wattage needed, use this formula: Amps x Volts = Watts

All of our Honda generators can be used to top up solar batteries or can be used when your solar grid is not providing enough power. Our generators are the best way to ensure you remain off grid - even when the sun doesn't shine! 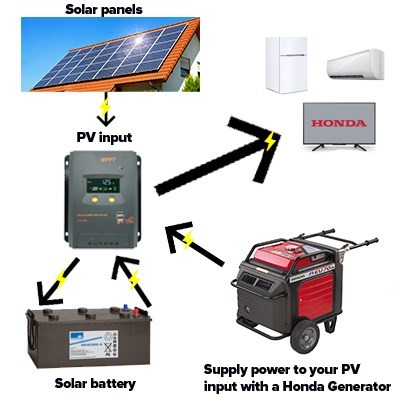